Heaven: To the Land of Happiness
헤븐: 행복의 나라로

Due to his incurable disease, Nam-sik desperately needs medicine he can’t possibly afford. Just to stay alive, he chooses to move around from hospital to hospital stealing medicine after work. Meanwhile, 203, a man in prison for embezzlement who is suffering from severe headache and seizures visits the hospital for a medical checkup. After being told that he has less than two weeks to live, 203 escapes and Nam-sik tags along in an unexpected and adventurous journey. The two of them are chased by the police and by a pair of unscrupulous gangsters. IM Sang-soo’s turbulent and at the same time very touching road movie / comedy is pure cinematic delight.

Born in Seoul in 1962. He studied sociology at Yonsei University, but soon switched to film. In 1989 he worked as an assistant director for the first time. Already with his directorial debut Girls’ Night Out (1998) he caused turmoil because of the film’s sexual bluntness. Political and social controversy have accompanied his entire career, especially his film The President’s Last Bang (2005). The Housemaid (2010), The Taste of Money (2012) and Heaven: To the Land of Happiness were invited into the Official Competion in Cannes, the latter also was chosen as the opening film of the 2021 Busan International Film Festival.

With kind support by the Embassy of the Republic of Korea 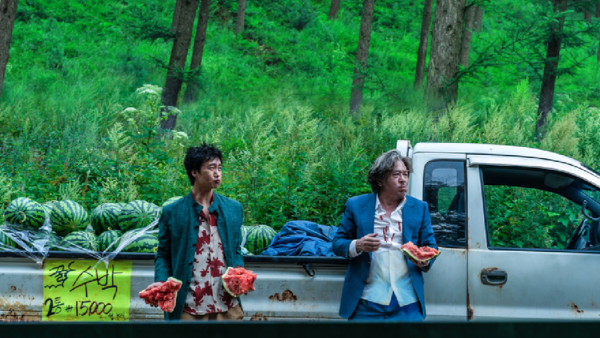 Heaven: To the Land of Happiness © Finecut