During the cherry blossom season, the skeleton of an old woman is found near the centre of Osaka. Detective Tomioka investigates the skeleton’s relation to a series of real estate scams by surveying the neighborhood and interviewing its inhabitants, including a Nepalese refugee, a Vietnamese technical trainee, a Chinese tourist, a Hong Kong tour guide, an Okinawan pornography director, a Malaysian travel agent, a Myanmarese foreign student, a Korean call girl agent, a Japanese country girl, an old Japanese man, and Tomioka’s wife, a language teacher. LIM Kah Wai masterfully assembles bits and pieces of their lives and stories, and follows them for three days and two nights.

LIM Kah Wai, born in Kuala Lumpur in 1973, studied electrical engineering in Osaka and film directing in Beijing. In 2010 he directed his first film After All These Years. His subsequent films such as Magic and Loss, New World, Fly Me to Minami and Love in Late Autumn have been screened and won awards at many international film festivals. He is considered a “pan-Asian” filmmaker who shoots his films in different countries with different language cast. No Where, Now Here (2018) and Somewhen Somewhere (2019) were filmed in Europe. LIM Kah Wai has been living in Osaka for many years. 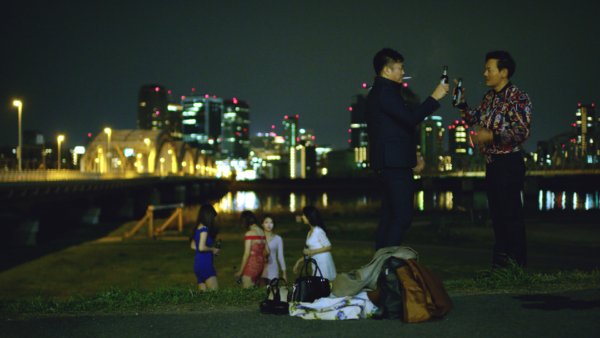